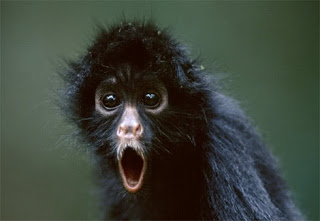 Yes, a monkey! Our ancestors, from some 4.4 million years ago. Remember?

But this isn’t the monkey that I’m talking about today. The monkey I’m referring to is your inner ‘irrational self’, the aspect of human nature which we (supposedly) tame as we grow up to let our ‘rational self’ develop and take charge.

But notice that I’m saying ‘supposedly’ because the reality is very different.

The monkey is on your back

The reality is that, in one form or another, this untamed monkey always remains within you and from time to time will creep on your back because it wants to have fun!

This is not necessarily a bad thing as long as the monkey is not in charge – but it’s certainly there, alive and kicking!

The worst thing you can do is to pretend that the monkey is not there or that it doesn’t exist. If you do that it will backfire on you and the monkey will do whatever it takes to be noticed!

In fact, denying your inner monkey can be pervasive and extremely counterproductive.

There is a Spanish aphorism that says:

A monkey dressed in silk is still a monkey 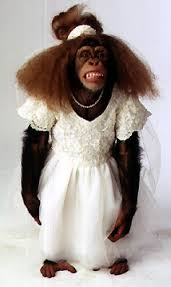 This is a metaphorical way to say that when we attempt to fake who we are or what we have we will eventually end up exposing that which we so badly want to hide.

The worst case scenario is when you know the monkey is there but you don’t do anything about it.

More than likely, in this case you’ll get so used to the monkey that you’ll eventually think you ‘are’ the monkey and sadly run the risk of remaining a monkey forever!

This notion resembles Carl Jung’s concept of the ‘shadow’ or the unconscious aspect of our personality which the conscious ego does not identify in itself.  So, because we tend to reject or remain ignorant of the least desirable aspects of our personality, the ‘shadow’ is largely negative. In the most part, this includes our irrational or more primitive animal instincts (the monkey!).

Everyone carries a shadow and the less it is embodied in the individual’s conscious life, the blacker and denser it is.

Everyday examples of your monkey in action

There are many different ways in which we can be ‘real monkeys’ in our everyday life. Some examples:

How to tame your monkey

Being able to tame the monkey is vital to becoming a mature adult and become truly successful.  What’s less understood (and even much less practiced), however, is that this is an inside job!

Who looks outside, dreams; who looks inside, awakes.

This is the secret to taming your monkey:

An important, and often unexpected, benefit of doing this work is that it affords you the ability to deal with the money of others. Why?  Because …

Knowing your own darkness is the best method for dealing with the darknesses of other people.

In Jung’s language, this means that each one of us should naturally seek ‘individuation’ – a     process of psychological integration during which innate elements of personality, the components of the immature psyche, and the experiences of our life become integrated over time into a well-functioning whole.

Hence, the importance to engage in ongoing personal development. Getting real results, by the way, always comes at a price.

There is no coming to consciousness without pain.

Now, perhaps you may be asking yourself the one million dollar question:

How does all this relate to me, leadership, the world of business or even politics?

We must be willing to let go of the life we’ve planned, so as to have the life that is waiting for us.

If you happen to be a formal leader, this means that – hopefully – you have already learnt that ‘exercising leadership’ is not about you but about those who you lead.

This realisation is experiential in nature; it goes beyond simply a cognition or understanding and usually emerges out of a crisis, failure, suffering or calamity, e.g. a major mistake that initially had huge negative consequences such as going bankrupt; the loss of a loved one;  dealing with depression, addiction or alcoholism; being diagnosed with cancer or other potentially terminal or chronic illness; or overcoming a near-death experience.

So, remember this. That terrible event that perhaps just happened to you, it’s just the door to new heights. This is actually a fact, even though you cannot see it that way right now.  Just let it be!

And that dream job, promotion, deal, project, car, house, fortune, etc. that you have always wanted?  It’s waiting for you around the corner but you can’t see it.  You’re too busy listening to your monkey and looking elsewhere!

Learn to tame your monkey and your wildest dream will show up!