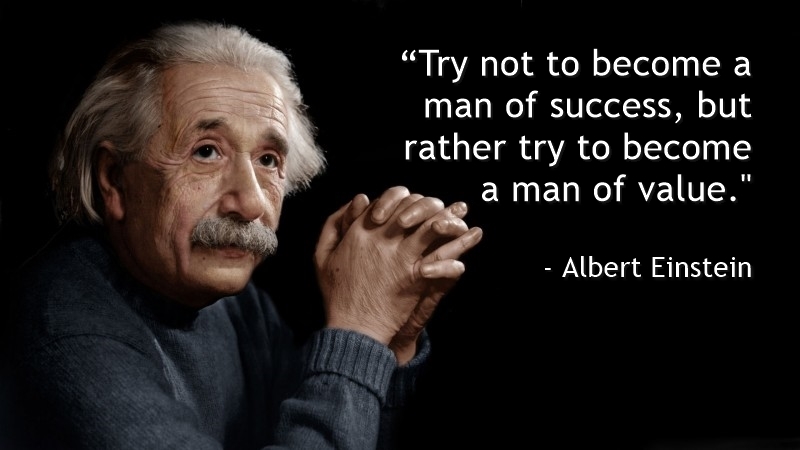 Yes, it sounds paradoxical – a seemingly contradictory statement which, when investigated, turns out to be true!

The first time I read this quote from Einstein it really made me think.  As a young professional, possibly like you, I was taught that success was the name of the game and I was conditioned to succeed at all cost. I lived by the old adage that says “failure is not option”. After all, who wants to be a loser, right?

But just think about it. Let’s be more critical consumers of pop psychology messaging and other contemporary illusory slogans and gimmicks.

Have you ever met someone, either a boss or peer, who really – and I mean ‘really’ – was trying to be successful by being extremely aggressive and competitive, or a brown-nose or a people-pleaser?

Have you ever met someone, either a boss or peer, who really – and I mean ‘really’ – was trying to be successful by being extremely aggressive and competitive, or a brown-nose or a people-pleaser?

Sad, wasn’t it? Or even annoying and unnerving? The worst part of working with such individuals is that there is no room for anybody else because it’s about doing whatever it takes for them to gain significance in the world. Of course, the need for such significance – or wanting to be noticed – stems from a need to compensate for a major deficit. These individuals are trying to fill in a big empty hole and a lack of self-worth. Hence, success becomes a major preoccupation in their life.

It’s only when we do not have something in our life, or when we firmly believe that something is missing, that we desperately try to get it at all cost! Think of it this way, if you already have it why would you try to get it so badly?

When individuals try to fulfil a desperate need to succeed they adopt one of two distinct types of behaviours: (1) Bullying; and (2) People-pleasing (a more desperate variation of brown-nosing):

In contrast to the bullies, people-pleasers try to be chameleons – always trying to be the person that someone else wants them to be. They are afraid to rock the boat; do not know what they really want; avoid speaking their mind; and find it hard to express their true feelings. For them, it’s easier to go along with what other people want or think. People-pleasers often fantasise about a strong person taking over their life and making it work; they avoid getting angry and find it extremely difficult to say NO – for them, this would mean the ultimate rejection (failure)!

Striving for success to fulfil or compensate for an internal psychological deficiency is a recipe for disaster. It’s not only a selfish goal because you are striving to be a success for yourself only, but it’s also an unattainable goal because it doesn’t matter what and how much you try to fill this inner emptiness, it’s never enough. It’s like greed, constantly seeking more and more.

Regrettably, the happiness, contentment and satisfaction that go with success never comes!

What can you do?

If you, or someone that you know, displays any of these behaviours, don’t hate yourself or demonise them. Instead, resort to your compassion and courage. This means seeking professional help or encouraging others to do so. Self-awareness and understanding are the initial steps, and change is possible.

Keep in mind that such individuals are really suffering and do not know better. Nothing will be more liberating for them than personal change – they just don’t know it yet!

Why be of value?

When trying to be of value, you are trying to help others. Assisting others to become successful is a sign of true success. This is how to recognise true leaders. They do not need to try to be successful because they are already successful and fulfilled. They no longer feel the need to prove themselves to, or need approval from, the world – to them success is about contributing and being of value to others.

You can easily recognise such individuals by their calm demeanour, selflessness, humbleness and willingness to help.

Getting there, however, is not necessarily a given for everyone. The examples mentioned above are somewhat extreme to illustrate the point. In reality, I believe that we all show glimpses of these behaviours. At the end of the day, it’s about progress; not perfection – yet another trap!

For some of us, it has been – and continues to be – a lifelong journey of learning and self-development. The important thing is to always be open and non-defensive to ongoing feedback from others!