Blog When The Going Gets Tough: From Resilience To Building Adaptive Capacity June 1, 2015

Leadership that makes a real difference can only show up when things get tough!

To exercise this kind leadership, we need to move beyond resilience and to achieve this, we need to build the adaptive capacity required to thrive in our increasingly demanding global economy, where hyper-complexity and adaptive challenges have become the new normal.

Resilience is only the foundation

That which does not kill us makes us stronger.

It’s no coincidence that ‘resilience’ or ‘bouncing back’ from difficult experiences when faced with adversity, tragedy, trauma, threats or significant sources of stress (e.g. serious health problems, family and other relationship issues, financial or challenging workplace situations) has become a major topic of interest in recent times.

Indeed, the ongoing practice of these seven strategies is critical to inoculate ourselves from, or to overcome, obstacles in our everyday life. Hence, they should be practiced and cultivated as they enable us to become stronger, wiser and more resilient – to survive and grow.

The above mentioned approaches/strategies and associated techniques, however, have a strong individual focus. If you wish to seriously impact the wider system (e.g. your team, organisation, community or nation), they are insufficient. Effectively impacting your ‘system’ requires you to move from the ‘I’ (self-management and self-leadership) to the ‘we’ (adaptive and collective leadership).

Emerging from over thirty years of research at Harvard University by Dr. Ron Heifetz and Marty Linsky, Adaptive Leadership (AL) – “the practice of mobilizing people to tackle tough challenges and thrive” – is now defining a new frontier in leadership development. This approach is very much consistent with Peter Senge’s systems thinking rationale, including the notions of ‘interdependence’ and ‘collective intelligence’ as presented in his bestselling classic ‘The Fifth Discipline’. Adaptive Leadership is an approach for making progress on the most important challenges in our personal and professional lives by mobilising people towards a collective purpose that exists beyond our own individual ambitions.

The term ‘adaptation’ derives from biology, biological adaptation or ‘survival of the fittest’: 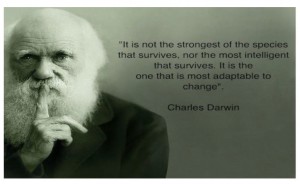 Diversity and inclusion in organisations

Diversity, when minorities form a critical mass and leaders value differences, unlocks innovation by creating an environment where ‘outside the box’ ideas are heard. In fact, we now have evidence that diversity and inclusion are the formula for success.

When organisations realise that their loftiest aspirations –the progress and innovations they want to achieve –cannot be reached using their traditional/current approaches, AL becomes the approach needed to diagnose, interrupt and create the capabilities the organisation needs to be able move to the next level. Hence, AL is purposeful evolution in real time.

Implications for organisations, communities, and their leadership

The adaptation described above also applies to organisations that want to stay relevant, adapt and survive. To this end, they need to alter their DNA (identity, primary task or purpose, image, culture and structures).

Dealing with such strategic shifts and transformations requires the emergence of leadership that:

Not surprisingly, adaptation (and AL) becomes the new source of competitive advantage. At the same time, AL is also a very risky and dangerous business!

The dangers of Adaptive Leadership

“To lead is to live dangerously because when leadership counts, when you lead people through difficult change, you challenge what people hold dear – their daily habits, tools, loyalties, and ways of thinking – with nothing more to offer perhaps than a possibility.

Moreover, leadership often means exceeding the authority you are given to tackle the challenge at hand. People push back when you disturb the personal and institutional equilibrium they know. And people resist in all kinds of creative and unexpected ways that can get you taken out of the game: pushed aside, undermined or eliminated.”

“Leadership on the Line: Staying Alive through the Dangers of Leading”

The adaptive challenge is compelling

You probably have heard this before:

Up to 70% of all changes attempted in organisations fail.

up to 90% of patients have not changed their lifestyle.

Even though such patients know they have a life threatening disease, for whatever reason, they can’t make the required changes.

This is because many people still fail to distinguish between ‘technical’ vs ‘adaptive’ challenges. In fact, they actually treat adaptive challenges (those which require new learning and for people to change their ways to be addressed) as technical challenges (those which only require the knowledge of experts, routine problem solving, for which past ways of thinking and operating are sufficient).

Here are some common examples that, no doubt, you’ll be familiar with:

Not surprisingly, such ‘easy formula-based’ approaches are really successful – not necessarily for the end user, but more so for the seller of the formula. Yes, ‘hope’ is always in demand and is easy to sell.

Unfortunately, as Peter Senge and his colleagues, put it:

“Most change initiatives don’t fail because they lack hope, grand visions and noble intentions. They fail because people can’t see the reality they face”

And to discover the reality we face, we often need to change our mindset first.

“The real voyage of discovery consists not in seeking new landscapes, but in having new eyes.”